The following information has been extracted and modified in parts from a Patient Guide to PFO (Patent Foramen Ovale), which was written and produced by the PFO Research Foundation/USA. They have kindly given us permission to use their material here and throughout this website. You can download the original brochure here. 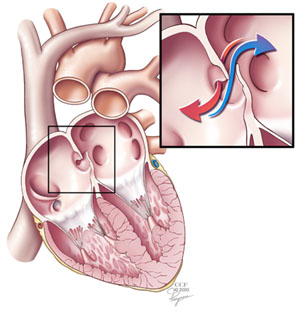 PFO Fast Facts: ‘Just give me the headlines !’

For US patients only

(PFO closure can still be performed, but it is considered an ‘off label’ procedure by FDA at this stage.)

What is a PFO?

Patent foramen ovale (PFO) is a small opening with an overlying flap in the wall of the heart that separates the two upper chambers or atria. The wall between the upper chambers of the heart, the atria, consists of two overlapping layers of tissues, the septum primum and septum secundum.

When the two layers fail to normally fuse together shortly after birth, the flap opening is called a PFO, which is a Latin derived medical term – Patent (to lie open) Foramen (window) Ovale (oval in shape).

Who has a PFO?

PFO’s are fairly common — they occur in approximately 20% of the adult population. Estimates range from 20-30% depending on the decade of life.

Unless you suffer from severe migraine headaches or have had a neurological event such as a stroke, chances are you wouldn’t need to seek medical treatment for your PFO. In fact, since PFO’s are so common, the detection of a PFO in an adult is usually incidental, i.e. has nothing to do with causing any problem.

PFO’s do not cause chest pain, heart palpitations, or heart failure. PFO’s typically do not disrupt heart function and people are able to exercise and carry out all activities normally. However, some people with PFOs can be at an elevated risk of stroke or suffer other symptoms due to a significant drop in oxygen levels.

Why Treat a PFO?

A PFO and Atrial Septal Defects (ASD) are often referred to as a “hole in the heart.” The PFO’s flap-like valve enables shunting — the abnormal mixture of blood between the right and left sides of the heart.

If the PFO allows right to-left shunting, oxygen-deprived blood can carry harmful substances to the brain. These substances include small blood clots, chemicals that may trigger migraine, or nitrogen bubbles that form when coming up from deep-sea dives.

Blood clots that cross a PFO and travel directly to the brain, lodge in an artery and can limit blood flow to a part of the brain causing a stroke or transient ischemic attack (TIA).

PFO patients often have one or more of the following symptoms

Approximately 40% of all strokes are classified as cryptogenic — meaning that the cause is unknown.

While PFO’s are present in approximately 20% of the population, between 40% to 50% of patients younger than age 55 with cryptogenic stroke have PFO.

Migraine headache is a public health problem of enormous scope that has an impact on both the individual sufferer and on society. In the United States, three large population studies have established the prevalence of migraine at 18% in women and 6% in men.

The potential relationship between PFO and Migraine / Aura: It has been observed by different centers in Europe and the United States, that people who complained of migraine headaches and then had their PFO closed (usually due to a stroke) claimed that their headaches were completely alleviated in 60% of the patients and in an additional 15% of patients the frequency of headaches was reduced by one half. Recent large case series studies have reported success rates for complete migraine aura relief in over 80% of patients.

This has led to the theory that a PFO may permit certain chemicals that ordinarily would be metabolized as the blood passes from the
right side of the heart through the pulmonary circulation, to bypass the lungs and permit blood from the veins to directly enter the brain. There may be some chemical or perhaps low oxygen itself, which then could trigger a migraine in susceptible people.

This theory is currently being tested in a randomized clinical trial in the United States called the PREMIUM trial – due for publication in 2015.

What is a migraine?

How is a PFO diagnosed?

PFO’s are not detected on a physical exam, an electrocardiogram, a stress test, or a chest x-ray. A standard trans-thoracic echocardiogram (ultrasound through the chest wall) is very good for assessing cardiac and valvular function but is not sensitive enough to detect a PFO.

A ‘bubble/ Saline contrast study’ is the most accurate way to detect a PFO or atrial septal defect (ASD). This involves the insertion of an intravenous cannula or drip into a vein in the arm and mixing Sterile Saline solution (salt water), a small amount of your blood and a small amount of air in a syringe. The solution is mixed together to make a foam solution for which the ultrasound is highly sensitive too. If there is a ‘hole in the heart’, then some of this solution will pass through into the arterial circulation (right to left shunt). This solution is not harmful to you, and has been safely performed in medicine for over 30 years.

PFO’s are often in a closed position and it may take certain “provocative maneuvers” to cause the PFO to open and be detected. Holding one’s breath, straining of chest and stomach muscles, and then releasing the straining and breathing is a common “provocative maneuver” called the Valsalva maneuver, named after an Italian physician from the 17th century.

Internationally it is considered best practice to use a combination of transcranial Doppler (TCD) with contrast and trans-oesophageal Echocardiogram (TOE/TEE) to identify and assess for a PFO.

The TOE/TEE is used to assess the PFO’s size and shape. It can also reveal the presence of other related defects such as an atrial septal aneurysm (ASA), which is a redundant flap septal tissue that can cause the size of the PFO or defect to increase. Other features often seen are Eustachian Valve and Chiari network.

Medical treatment
Patients who have had a stroke or other neurological event are often given blood thinning medication, such as aspirin, Plavix (clopidogrel), or Coumadin (wafarin) to minimize the risk of recurring stoke.
Open heart surgery
It is extremely rare to consider open-heart surgery to close a PFO since it can be closed with less risk and less trauma to the body by a procedure involving catheter delivery of a PFO closure device. When open heart surgery is needed, the PFO is closed by the placement of sutures that seal the flap covering the PFO. In some cases the surgeon may remove the tissue and replace is with a piece of
the patient’s pericardium or a medical cloth patch.
Robotic surgery
Robotic surgery is a form of open heart surgery that has multiple small incisions in the chest rather than one large incision and uses a robotic device to hold and manipulate small surgical instruments to repair the heart using video camera guidance.

Rather than open-heart surgery, a PFO closure procedure does not involve incisions in the chest, the heart being stopped, or the prolonged recovery needed after open-heart surgery. Rather the heart is reached via the insertion of catheters typically in a leg vein, maneuvered to the heart, and then used to insert or implant a medical device. The heart remains beating and the procedure is often done with the patient lightly sedated and using local anesthesia over the leg vein.

PFO closure involves the insertion of a septal occluder, or cardiac implant in the PFO to reduce or eliminate shunting. The device is designed specifically for septal defects. There are several devices that have been developed. Most devices incorporate some form of metal that acts as a spring to form 2 discs on opposite sides of the atrial wall. The device itself may close the PFO, or it approximates the flap of the PFO and the wall of the atrium so that it forms a substrate onto which, over time, the body’s natural tissue grows, thereby closing the hole. During the procedure, ultrasound imaging is used to identity the correct size, fit and placement of the PFO closure device. The device is then inserted through the catheter and moved to the correct location.
Once in place, each side of the device opens in parallel, on each side of the PFO and then closes to hold the PFO shut. Catheter-based PFO closure is a simple procedure that typically takes 1 hour to complete.

The procedure is often done on an out-patient basis, or with a brief hospital stay. PFO closure offers a very high success rate and low risk of subsequent complications. However, no medical procedure is free of complications. Risks of PFO closure include bleeding from the vein in the leg, bleeding from the heart, arrhythmias, an increase in headaches, or chest pain. Depending on the device, these symptoms can be so severe that the patient may want the device removed.

Once scar tissue has formed over the device, the only way to remove it is with open-heart surgery. Hopefully, the results of current randomized clinical trials will determine whether the benefits of PFO closure outweigh the potential risks of the devices. Recovery following PFO closure typically involves restriction from vigorous physical activity for several weeks following the procedure.

ASA – Atrial septal aneurysm, an abnormally enlarged, bulging and mobile atrial septum (a wall in the heart separating the 2 upper chambers). An ASA associated with a PFO is thought to produce an anatomical condition that is more likely to cause clinical problems.

Catheter – Thin flexible tube inserted in the body from a leg, arm, or neck vein or artery and used for delivering therapies such as medications, electrical energy, or implanting medical devices, like a PFO closure device.

Occluder – Another name of a non-surgically implanted device to occlude a PFO or ASD.

PFO – Patent foramen ovale (PFO) is a small opening covered by a flap of tissue in the wall of the heart that separates the two upper chambers or atria. Since they are so common and are generally not considered a problem, i.e. they are incidental, PFO’s are not considered an abnormal structure but a remnant of the way the heart is constructed in all people when they are in their mother’s wombs. Most PFO’s fuse shut shortly after birth.

Shunt – A condition whereby blood from the right and left sides of the heart mix inappropriately.

Sleep apnoea – A medical condition including repeated abnormal pauses in breathing. Obstructive sleep apnoea (OSA) includes the occurrence of obstruction of the airway to the lungs. The presence of a PFO may worsen this condition.

TIA – Transient ischemic attack, often refereed to as a “mini-stroke” is an episode in which a person has stroke-like symptoms but they are
transient, i.e. last less than 24 hours, and are not associated with brain damage, i.e. are not a stroke or CVA (cerebro-vascular accident).

Valsalva maneuver - To transiently open a PFO, a person is asked to perform a Valsalva maneuver that consists of taking in a large breath, holding it, bearing down by contracting muscles typically used during child birth or a bowel movement, and then releasing it. During the release phase of a well-performed Valsalva maneuver, the pressure on the right atrial side of a PFO is greater than the left atrial side. The PFO flap opens, and injected micro-bubbles will immediately appear in the left atrium from shunting through the open PFO.